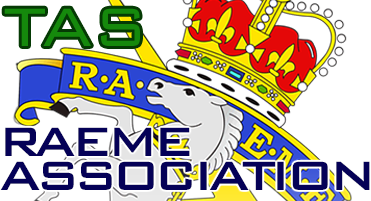 The RAEME Association of Tasmania has three Membership Categories;

b. Associate Member, and

Membership is open to persons who are currently serving, or have served in either full or part time capacity in the following:

c. Armies of the British Commonwealth of Nations in a kindred capacity as stated in part a. or b. above.

A person is qualified to be a member of the association but only if the person has been:

a. Nominated for membership of the association as provided by rule, and

b. Approved for membership by the committee of the association.

Members leaving the state of Tasmania may retain their membership and may belong to any number of other RAEME Associations subject to their acceptance by these associations.

Associate Membership is open to other service personnel from the army, navy and air force, excluding those personnel elegible for Ordinary Membership

Associate members are required to pay an annual fee, the same as that of an ordinary member.

Associate members have no voting rights within the association and are not eligible for any executive committee positions.

The Association Committee may from time to time confer an Honorary Life Membership to any person who they deem to have provided outstanding service to the association.

Honorary Life members will have full voting rights within the association.

Honorary Life members will not be required to pay any membership fees or subscriptions.

As soon as practicable after receiving an application for membership, the secretary shall refer the application to the committee, which will determine whether to approve, or to reject the application.

Where the committee determines to approve an application for membership, the secretary shall, as soon as practicable after that determination, notify the applicant of that approval within the period of twenty-eight (28) days after receipt by the applicant of the notification. The Membership Member shall enter the applicant’s name in the register of members and upon the name being so entered, the applicant becomes a member of the association.